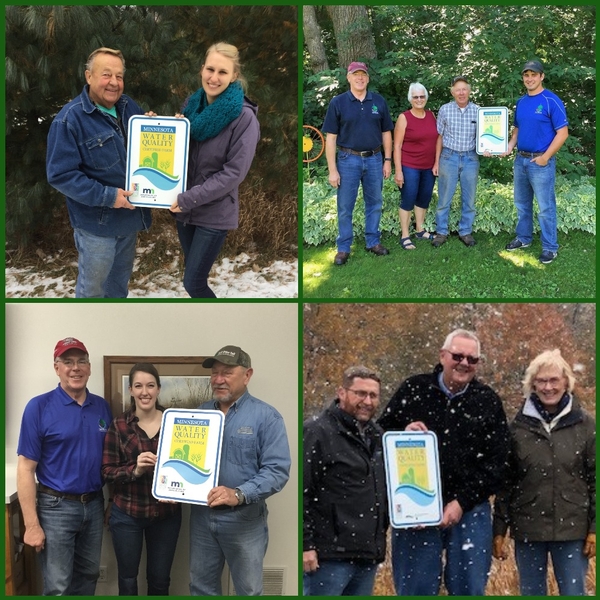 Last year I gave a presentation on the Minnesota Ag Water Quality Certification Program (MAWQCP) at a meeting of the Central Minnesota Irrigator’s Corporation (CMIC).  This meeting was held in Wadena, and the farmers in attendance utilize irrigation in their farming operations and come from the surrounding area.

My goal?  To let these producers know about eight irrigated farming operations in their area that became Water Quality Certified in the prior 18 months.  I gave details of how these operations became Certified and how local newspapers gave recognition to these producers for their decisions to adopt a ‘system’ of conservation practices which protect water quality and prevent soil erosion.  Among other conservation practices, these Certified producers practice careful irrigation management and use Best Management Practices (BMP’s) for both nutrient and pest management.  Then I led this audience in a round of applause to express their appreciation to these Water Quality Certified producers, several of whom were in attendance.

But later, during a break in the meeting, I learned something interesting.  I had a conversation with one of the farmers that I’d mentioned in my presentation.  I had assisted him in the Water Quality Certification process, and later I worked with the local newspaper to give recognition for the conservation practices adopted by this operation.  But this producer surprised me – he told me that he and his wife had received two thank you letters from members of the nearby lake association – notes that expressed appreciation for the conservation accomplishments on their land.  This farm couple was very pleased by their neighbors’ expressions of gratitude.

Hearing about these thank you letters also pleased me.  It was good to hear that neighbors would take the time to say “Thanks!” for the efforts that this farm family put into protecting the water quality of the nearby lake, as well as protecting groundwater and conserving soil and preventing erosion.  This farming operation practices careful fertilizer management and makes good decisions about when to till the soil, so that a protective blanket of stalks and stubble remain on the soil surface to prevent soil erosion caused by water or wind.  They have established perennial grasses in drainageways where there is concentrated flow of water after a rain event.  As a result, gully erosion is prevented, and eroded soil does not end up in the lake.  They follow Best Management Practices for controlling weeds, insects, and disease in their crops, as well as carefully managing their center pivot irrigation systems.

For these reasons, I also want to thank the producers in our 11-county ‘North Central’ Minnesota area who have invested the time, effort, and finances to implement conservation practices on their farms and who have also participated in the Minnesota Ag Water Quality Certification Program.  And …. I hope that we will all be the kind of neighbors who thank the producers who make choices in their farming practices to protect our water and soil.